A Pint of the Old and the New: Microbreweries in Dunedin, FL

A couple weekends ago we took a trip to Florida to visit family.  While we were there, we visited two microbreweries: one, and old favorite, and another, a new find. 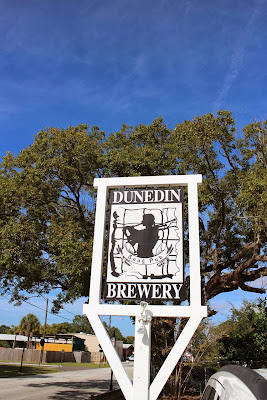 Dunedin Brewery is the oldest microbrewery in Florida.  Located just off of 580 near Alt-19, this oldest brewery is one of our old favorites.  We've been going there for years, every time we're in the area, and have enjoyed seeing them, and their beers, evolve.


Dunedin Brewery's shop is in an old firehouse.  The big doors are now glass, but they must be useful for getting large equipment in and out.  The inside is mostly one big room, where their brew and fermentation vessels live.  Several years ago they added a seating area and started serving out of their own taproom, so you can now drink within arm's reach of your favorite fermenter.


Initially, they had very, very basic bar food.  I'm happy to say that this trip their food was the best yet, what I would call "quality" bar food.  Tasty.


I'm also pleased to say that their beer is still great as well.  They have several solid favorites, and usually a rotation of more adventuresome variants on tap.  This time the standout was an Imperial Porter, which I gave 4.5 stars on Untappd.  The one criticism I'd level at their beer is they don't do a good job naming their beers, so it's often hard to tell what you're drinking, especially if you are outside of their distribution area and visit infrequently.  I've been to Dunedin Brewery a dozen or more times, but if you asked me what beer you shouldn't miss, I couldn't tell you anything other than they're all pretty good.  To me that seems great for their reputation, but not too good for building a brand. 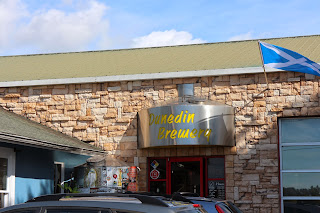 They also do a ton of events, both in the brewery and in the area.  They're active on social media, so that seems a great way to keep up with the happenings at Dunedin Brewery.

The New One: 7venth Sun 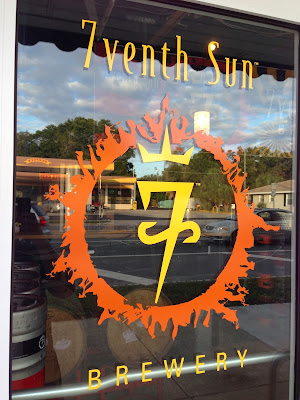 7venth Sun was a drive-by spotting for us.  Situated at the corner of a little strip mall at the intersection of 580 and Alt-19 (very near Dunedin Brewery), it does sport a good location, as anyone sitting at that intersection can spot it. Even though it was an on-the-spot find, we mentioned it to our friends and family in the area, and they had all either been to it or heard good things about it, so word is out on this new brewery.


7venth Sun is quite new: the guy at the bar said they'd been open less than a year, from about January 2013. One taste of their beers, however, and you can tell that the brewmaster knows his (or her) trade.  We only had time to sample a few, and I didn't get the chance to chat up the staff, but next time we're there, we will try to find out more.  For most brews, they do three different pour sizes, which I haven't seen before but seems like a great idea to me.


An unassuming place, the inside is divided between a small bar and seating area on one side, with what may be the smallest commercial brew space I've ever seen on the other side.  There is also plenty of outside seating, and an open window bar, where you sit on the inside and look outside.

Now, maybe we just know what we like and happened to pick the best ones, but I had a full pour of their Mangrove Double IPA (going straight to the double IPA at a new place is my thing now, I've decided) and it was fantastic.  Coming in at 9.7%, it was exactly what I like in an imperial IPA - balanced, with the right amount of crisp IPA mouthfeel and a really good color.  Tabitha's thing is of course still getting a few small pours, which also were all excellent.

We were super pleased with 7venth Sun's beers, and we will be coming back when next we're in the area to perform a more in-depth analysis (i.e. taste more beers).  So keep an eye out for that article soon!