The "A" in Acadia Stands for "Awesome"

First, I must admit: I didn't do enough research before we made our way to coastal Maine.  Perhaps it's a failing, but I do enough research in my professional life, so learning too much about a place feels like work, which is contrary to the entire purpose of vacationing.  Sometimes that leads to wonderful discoveries of places off the beaten path.  Most of the time it means you don't get to do everything you want to.  But maybe it feels a little more exciting nonetheless.

Going there, I knew Acadia was a popular National Park.  I figured it was because there seemed to be plenty of cool stuff to do, with mountains, ocean, trails, etc.  But I had no idea exactly how huge the place was.  You could spend a couple weeks hiking and probably only see half the trails.  (Speaking of all the activities, there is a fantastic free app for Acadia - check back soon for a future post all about it.)

It was in Acadia on our first day there, sitting atop Cadillac Mountain, discussing our itinerary (i.e. we had no real plan!), that the idea for Hop. Spice. Travel. was conceived when we tried to prioritize seeing the sights, finding the most interesting local restaurants, and visiting the local breweries.  Here's what we managed to squeeze in to our four night visit...

If you can drag yourself out of bed long enough before dawn, which in New England in the summer feels to me like about 5 minutes after sunset, Cadillac Mountain is supposed to be particularly incredible to view the sunrise from.  Unfortunately, we had to settle for just incredible as we made it there in the mid-morning.  Cadillac Mountain is the highest point in the park, and the view from just about any direction is excellent.

It's a beautiful drive to the top, with lots of places to stop and take pictures, and there is parking (it gets crowded) and a gift shop up there. I bought a bumper sticker that says "I like it on top / Cadillac Mountain"  It's on my kegerator.  It's my new favorite sticker.

Several trails are accessible from the top, and while the trailheads aren't well-marked, the trail paths seem to be.  I think most of the trails in the area are described as "strenuous" due to the gradient, so be prepared to sweat.

Park Loop is the set of roads that circumnavigate the main part of the park.  The name doesn't do it justice.  It's a good 20-30 minute drive (much longer if you keep stopping) that takes you to some of the must-see places, like Thunder Hole and the Otter Cliffs, Sand Beach, and Jordan Pond.

We didn't walk down to the beach, because we didn't dress appropriately (planning!) but were instead geared up for a light hike.  We did get to check it out from the cliffs above, and it looked like nothing you would ever expect to see so far north. 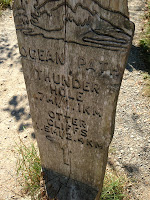 Alongside Park Loop from the Sand Beach area is a path that takes you to Thunder Hole and Otter Cliffs.  The rocky cliffs along this path are incredible, and you can easily climb all around them and descend all the way down to the waterline at spots.  They were really fun to walk around and take pictures, and they go on for what seems like miles.  I did notice several more local-looking people, who apparently scorning the beach opted to bring some beach towels and a cooler and sun on the rocks.  Seemed like an adult-fun thing to do.


Thunder Hole, was, alas, not thundering when we arrived.  I deemed it a fair trade for the excellent weather we were having.  There was a sign explaining the physics of the thunder noise, that included an explanation for why it sometimes didn't make its signature thunder sound, but I didn't take a picture of it.

Jordan Pond is at the far end of the Park Loop Road.  Beside it sits a large restaurant, actually located in the National Park, called Jordan Pond House.  Since it's famous, and the only place to eat inside the park, it's a very busy place.
We arrived 30 minutes before opening and got seated outside immediately when they opened.  We were glad we did, because the queue stretched quite a distance by the they opened.  The line of servers waiting to bring people to their tables was impressive!

Tabitha had tea, and we both had popovers and then ordered entrees.  The popovers were the most interesting by far.  It's amazing how many cultures have variations of fried dough, and how they pretty much all taste awesome.

It was our last stop in Acadia, and it was another beautiful day.


(After some thought, I'm going with Absolutely, Completely Amazing; Damn It's Awesome.)

Next up, we'll be posting about the areas surrounding Acadia, where we stayed and other stuff we did.