Come in here, dear boy, have a Cigar City beer. 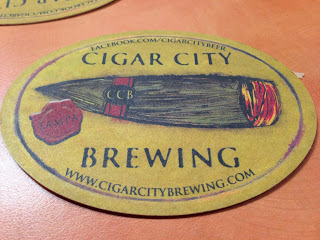 Christmas time usually finds us in Florida, where we escape the cold and visit family.  The day after Christmas last year we made our first trip to Cigar City Brewing with some brew friends.  We liked it; lots of great beer, and seems like it's being run by good people.  This year, on December 26th, we made a trip back. I snapped a few pictures on both trips.

For those who don't know, the name Cigar City comes from an old nickname for Tampa.  In 2012, we took the tour of the brewery.  Now, it's been a year since then, but here's what I can remember.


First, I was surprised to learn that this facility (the one you're at if you drive to the main Cigar City Brewing address online),  is no longer the primary brewing facility.


They continue to make a small amount of beer here, but as of last Christmas they had recently expanded into a larger commercial facility up the road.

That works out for us customers, because they continue to provide tours and serve great beer in their taproom(s).

The tour was standard fare, I think it was about $5-7, but you got a beer and a Cigar City shaker glass to take home with you.  I do remember the guide was really nice and answered all my dumb questions.

One of my dumb questions was about Cigar City's predominant use of cans.  Cigar City is a huge proponent of cans, for several reasons that were mentioned on the tour, including their portability, cost, environmental considerations, and the fact that they don't let light in to break down the beer.  I've noticed other craft breweries have similarly embraced the aluminum in greater numbers.  But since he was listing all of the benefits of cans, I figured that was a good time to ask how, given the recent (this was 2012, remember)  revelations about BPAs in can liners, they reassure their customers on that number.  Our guide was a little stumped, but handled it graciously as I recall.

Since then, I've done my own research, and I'm currently falling on the "generally avoid all food and drink in cans" side of the fence.  That said, I didn't let that stop me from taking a pack of my favorite Jai Alai IPA home with me to TN.

There are two sets of taps and two bars at the brewery.  The smaller one (perhaps the original one?) is on the left, and it seems to have more of the standard, year-round Cigar City beers on tap. The larger room, on the right, has more taps with a greater variety and a cool monitor with info about what's being served.

When we went a year ago, we got there early, did the tour, and had a few beers, and the place really started to fill up.  This Christmas, the place was already hopping when we arrived, and quickly filled.

There's plenty of seating, and they needed it, as everyone who wanted a break from their families (or a drink with them!) the day after Christmas made an early start of it, like us.

The beer, as we expected, was excellent.  One of the most interesting brews I had was a 7% IPA called Hopped on the High Seas.  It had a different malt character than I expected, and may the first Simcoe IPA that I actually like.


They do flights of small pours, so between the 5 of us, we made it through almost everything we hadn't tried before. Everyone was happy.


Now let's eat, down the street, at a Brick House

Although the taproom at the brewery now does have a limited food selection (sandwiches and chips - Tabitha loved the malanga chips), we opted to hop down the street to the Brick House Tavern & Tap, which is apparently a national chain but which we don't have around home. 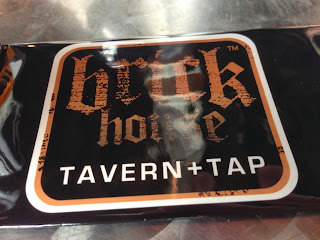 One of the neat things about this place is that they do have a decent beer selection, including some local brews.  Sitting outside to enjoy the warm winter sun, we enjoyed a beer "bong" of the Cigar City Jai Alai, which none of us had gotten to drink at Cigar City, what with all of the limited selections to choose from.  FYI, a beer bong here is basically a cylinder of beer with a tap at the bottom, resting on a heavy base so it can't tip over.


All in all, a great afternoon.  Florida in the winter and Cigar City, both the brewery and their beer, we highly recommend.
Posted by Chris at 9:38 AM